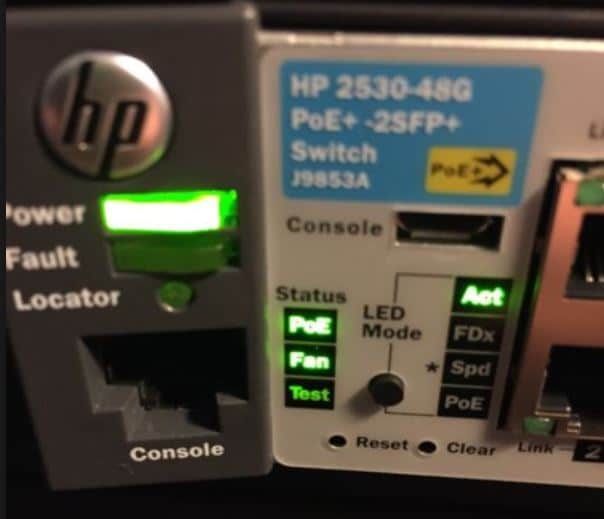 If you’re finding it frustrating that your new HPE 2530 series switch is giving you Insufficient Power Allocation error messages when you start plugging in various PoE devices such as phones, cameras, access points, etc. then this article should help solve the problem for you in certain cases.

I recently installed several J9772A HPE 2530-48G-PoEP switches.  Each switch was supposed to power about 20 HPE Aruba wireless access points, 12 IP phones, and 8 IP cameras.  The switch as selected, according to manufacturer specifications, has approximately 382W of available PoE power which should have been MORE than plenty to supply PoE power to all those devices if we figure an average of:

Calculated power cost should be around 224W, which doesn’t even approach the limits of a switch capable of delivering 382W according to specifications.  [Bear in mind, nearly all PoE devices initially draw MORE power during their boot up sequence, so it’s possible that even an IP phone can draw 10W or so while it’s booting up.]

Unfortunately, shortly after I started plugging in my HPE Aruba IAP-325 access points, I noticed that only the first 15 access points would receive power, and the remaining 5 access points wouldn’t even come online.  The switch’s event log showed the following error, “port 16 PD Denied power due to insufficient power allocation”.  At this point, I was rather confused, considering the 15 access points that were plugged in should have only been drawing approximately 6W each, for a total of roughly 90W, far short of the switch’s 382W overall power capacity.

Checking power level on the switch using the “show power-over-ethernet” command resulted in the switch supposedly using more than 370W of power already: 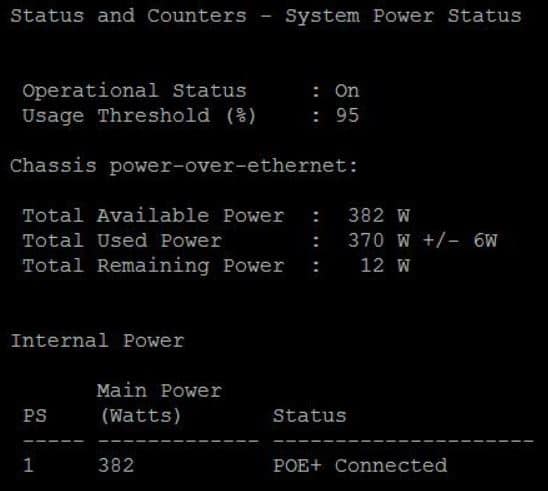 370W in use already?  That seemed completely wrong, so I followed up by issuing a “show power-over-ethernet brief” command for more details.

These results were even more confusing because they showed each of my access points only drawing (approximately) 6W (which is what I’d expect).   At this point with only 15 access points connected, I –should- be drawing roughly 90W of POE power, but the switch is inaccurately reporting that I’m utilizing over 370W.  Unfortunately for me, I still have 5 more access points, 12 more phones, and 8 more cameras to plug into this switch!

Struggling to figure out what was happening, I did something I rarely ever do on an HPE switch, I decided to go into the web interface to see if I could find any more valuable information regarding the strange loss of available POE power.  This is where things got even more confusing!

According to the CLI output shown above, the switch is using roughly 6W per access point, but according to the web interface output shown here, the switch is using 25W per access point!  Obviously there’s a contradiction in values here.   Furthermore, if we calculate 25W x 15 access points, we end up with 375W of total power, which is exactly (within the +/- 6W) what the “show power-over-ethernet” command reported earlier (see first picture in this blog) and the reason why adding additional POE devices to the switch at this point result in “PD Denied power due to insufficient power allocation” error messages.

Like any other problem found on most switches, the first reasonable course of action was to bring the switch firmware code up to date as it was running firmware code from last year.  I ended up loading firmware code YA 16.02.0008 which is current as of June 2016.  Unfortunately, the firmware code update didn’t resolve the issue or improve things at all.

After further diagnosis, one peculiar thing I noticed was that the switch itself was allocating power to the access points not by the actual power they needed, but instead by the value being reported to the switch via LLDP.  I started to wonder if perhaps the firmware code on the access points was programmed to report incorrect power values via LLDP, so I decided to make an adjustment on the switch to base the POE power draw on what the switch itself actually sees as “usage”, not based on the usage value as reported to it by LLDP.

The following command allows the switch to calculate power draw on actual power usage instead of the reported LLDP value:  no lldp config 31-47 dot3TlvEnable poeplus_config

After making that adjustment and waiting a moment, I noticed the following changes in the way the switch was reporting used/available POE power: 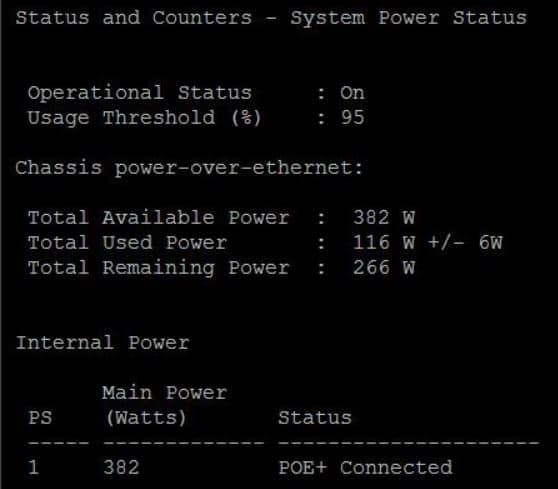 The adjustment brings down used POE power from 370W to only 116 W – a drastic improvement.  I also decided to check the web interface to see if the Aruba IAP-325 access points were still reporting an incorrect value of 25W for current power draw.

Notice the huge difference, 6W versus the previously reported 25W, in the way the switch is assigning power to the access points.  At this point, I could easily plug in my additional 5 access points, 12 phones, and 8 cameras, and still only end up utilizing around 224W of the switch’s total 382W that were available.

That single command and adjustment will allow me to better utilize my POE power across all my HPE edge switches in the future.  So if you’re running into problems with your HPE 2530 series switch seemingly not having enough power available, please make sure your switch is calculating POE power based on the actual usage of the POE device and not by the incorrect POE value as stated by LLDP.

5 Causes of Poor Wireless Access in Schools and How to Fix the Problem [Updated 2020].